At the time, I was delighted when Mr. Trump became president. At least he had charisma.

At some point, he did cause actions that I could not understand. A bombing in Syria was one of these actions.
Then Mr. Trump did something that every president before him had refused to do. It is about the relocation of the US embassy in Israel. This had a rather unpleasant impact on the very unstable conditions in the area.

I know the discussions about Mr. Trump’s connections! If you want to become president in the USA, you need a lot of connections!

What I should really think of Mr. Trump, I have not known until now. His timidity, with regard to the stolen presidential election in 2020, gave me pause for thought for a very long time. Now my thoughts have found new nourishment. Look at the two following pictures. They come from the following first video. You can see the time stamps.
At the moment it is still unclear what this means! 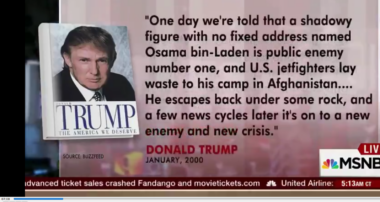 Here you can watch the part 1 of the video:

So: Mr. Trump knew the name of the alleged perpetrator 10 months before the destruction of the World Trade Center!
Now I would like to know what this means!
THAT simply DOES NOT GO IN MY HEAD!

Here you can watch the part 2 of the video:

I fully realize that this information is important! Should it actually be true, then it is all the more important!
I just do not understand what this means!

You can easily download the videos, which I actually did by accident. Then I wanted to send the link and could not find the original source again!
This almost looks like the video can only be found if you are

This looks very much like this video should not be distributed under any circumstances!

From now on I will not talk about it any more!